FTL: Faster Than Light is a videogame made by Subset Games. The game itself began on kickstarter and actually succeded. But how good is this game? Read this review to find out!

FTL: Faster Than Light is avaiable on Steam and GOG. For this review I decided to play using Steam. As far as I can tell is that the difference between the two is that Steam has a limited version of save sync and trading cards.

FTL presents itself as a roguelike in space. As such when I went in to take a look at this game that was my first idea: Get a look on wheter the graphics fit the theme. And FTL does this quite well! The game presents itself to you from a static (with some parallax here and there) 2D-topdown perspective. The graphics are not extremely detailed but it is clearly visible that a lot of work has gone into it’s design. 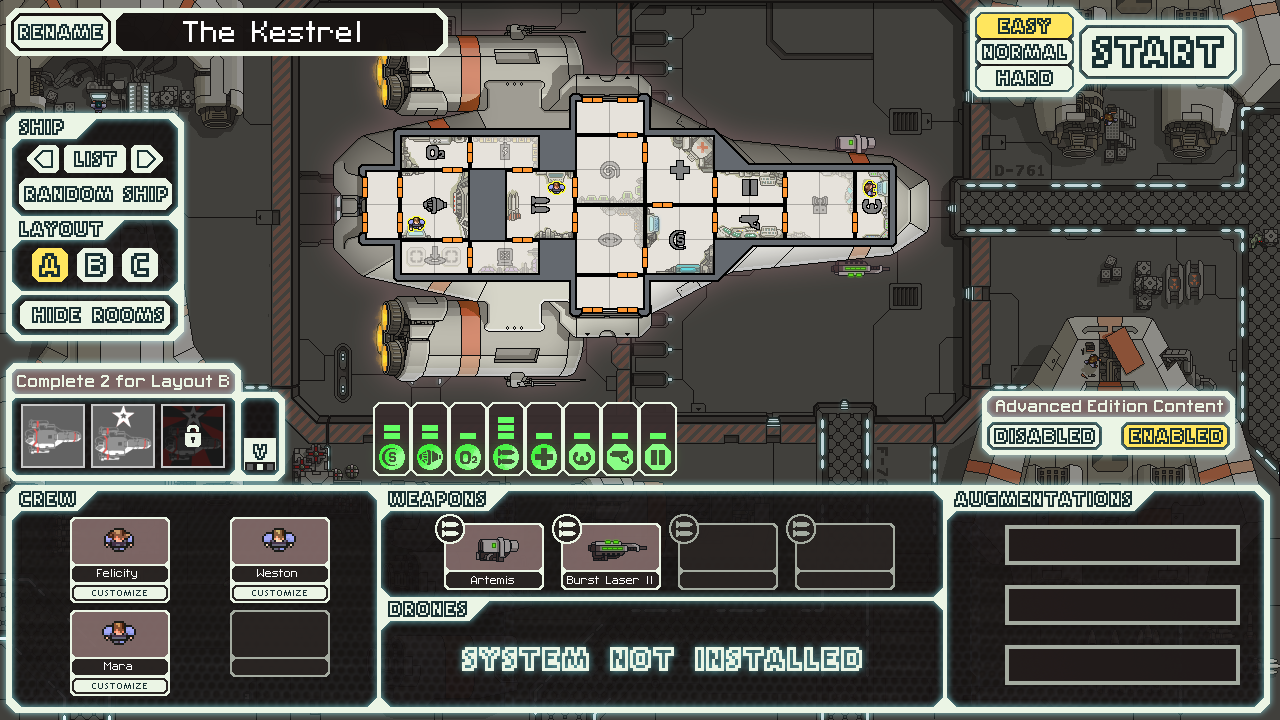 Image of the starting ship, courtesy of the FTL Wiki. Note that the grayed out icons don’t appear in game.

This is the ship selecton screen. Whilst it isn’t expansive, this is what makes FTL so great: Only that what is needed appears on the screen, nothing else. Very good graphics indeed.

FTL’s soundtrack is made by the composer Ben Prunty, and it is truly a masterpiece. Whilst every track employs the same few tones heard throughout the game, the individual pieces of each track are sublty different, causing me to become really submerged into theorld that FTL creates. And after all, isn’t that the point of a great soundtrack?

Advanced Edition (Pay what you want)

FTL isn’t terribly story rich, but that is something that can be lived with. Here is the plot: You play as a ship for the Federation who has important info regarding the weakness of the Rebels. Your task is to go out there and deliver this information to the last sector. Whilst this isn’t the most difficult plot ever seen, it doesn’t need much more. The plot is naught but an excuse for the real thing this game offers: Lore, lots and lots of it in fact. The Lore of FTL is truly huge, with each species having their own fair share of it. At the same time it also leaves open enough holes to permit a normal user to make their own deductions.

What it lacks in story, FTL makes more than up for it in it’s gameplay. FTL is a roguelike, and to quote Yahtzee from the Escapist on his review of it, that means: “ flinging your head at a wall until one or the other breaks, the sort of thing you’re supposed to play over and over again”.

There is more to FTL than that though. The game offers a simple combat system: You left, enemy right. Now go!

During combat you can choose to target rooms, teleport your crew and several other things to make each fight as unique as possible. During the game you can also unlock new ships during quests or beating the game. Each ship has a new layout, weapons loadout and crew setup.

The weapons and drone system are your primary means of attacking and they have it nailed down with each weapon having their own usefulness.

The crew can consist of nine races, each with their own strengths and weaknesses: Humans are neutral, Engi are good at repairing but bad at combat, Mantis are the opposite, Rock are immune to fires and have more health but are slow, Zoltan are weak but provide free power, Slugs can sense crew through nebulas. Much customization and usefulness indeed.

FTL is an amazing game and provided me with over 200 hours of playing. A definite recommend.

From GitHub Fork to GitHub Repo

So a few minutes ago I moved my website (which was originally a modified fork from Jekyll Now) to it’s own repository. The process to do this isn’t difficult, but it also requires one to have some time avaiable. So here is a simple guide toshow you how to do this.